The Melancholy Robot and the Caterpillar

This time story AND art both by me. I wanted to get into the act 🙂

The Melancholy Robot is a collection of flash fiction stories about a robot who wishes he were human. It focuses on its daily life and small experiences. I’ve asked different artists to do renditions of the stories; a different artist creates art every day inspired by the story. It’s been a fun experiment so far, I hope you enjoy!

Check out the other Melancholy Robot stories here.

As I look out my kitchen window, a vast emptiness consumes the view. The tree is gone. 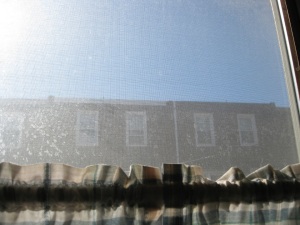 I love my small property in suburban Philadelphia more than I can explain. Sure, I can’t stand the neighbors, the cramped street, the parking, but my house is another story entirely. I have (or should say had) four trees which shaded my house beautifully in the summer, keeping the heat at bay and my electric bills down.

And then there were three.

Storms claimed my lovely tree, an elm that has slowly deteriorated over the years. My neighbors were afraid it would fall on their homes, and during the last ice storm even I became concerned when the branches that fell at 5AM were so big that the sound rattled my whole house. So I gave in and the tree had to go.

I promised Mother Nature, myself, my close friends, my girlfriend and family, everyone really, that I would plant another. Nobody seems too concerned about it, but this tree, every tree means the world to me. So for now, as the ground is still frozen, I wait until the moment when I can finally plant another. And for now, when I look out any window facing the alley, I can feel that emptiness of the view, the lack of something, and even though I can see the beautiful blue sky that is out there today, I miss the branches, the leaves, the drooping arms of what was once a beautiful elm. 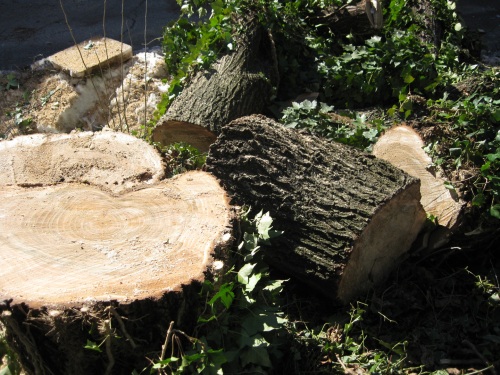 Footprints in the Snow

“I’m coming to Canada on a school trip. I’ll be staying right near you. I checked.”

“What?” she asked, a surprised look on her face that he could see via Skype all the way from Philadelphia.

“My professor is organizing a trip for next month for our geology club. He has some crazy notion that there’s a group of kimberlites that might have formed diamonds in them so he wants to abuse our club to become rich.”

She shifted in her seat and he could see she was uncomfortable. Either that or nervous, he couldn’t tell.

She thought back to that conversation as she sat in one of her favorite spots a month later. She’d come across the old cabin doing a nature shoot for her Digital Photography course and noticed the dilapidated hunting cabin that was falling apart from disuse. It was cold out and the recent snow made it stand out in the woods; she doubted anyone had set foot in the building in decades. From inside she could see enough of the snow through the giant cracks that had formed between the logs, and while a draft did float through the building the aged walls still kept some of the cold out.

Today was much like that first day she found the building. A fresh snow accompanied a cold day, and she was so nervous about meeting him that she didn’t even think to bring a coat. In her hands she held the best gift she’d ever received from a boy. Last Christmas he bought her the small porcelain carousel, inspired by a trip she’d taken over the previous summer photographing vintage carousels across the country. They reminded her of her father before he passed, and somehow the photographs all seemed to capture that, which she always thought helped her win the contest that helped her attain her first gallery show in the city.

She was to meet him in one hour in a café near campus, and even though they had Skyped for hours every week, he still insisted she bring the small toy so he would recognize her. She had romantic notions which were leading her to such nerves that she needed to collect herself in the cabin, the place she often found herself in moments of doubt, nervousness or deep thought. This one was all three.

She walked to the window, the most comfortable place to sit, and brushed the ledge off with her hands so she wouldn’t get her favorite flower print leggings dirty, just in case. She had no idea where their meeting, or date, was it a date? would lead. She’d fallen for him over the past two years of constant texts, calls, IMs, and Skype dates but never had the desire or nerve to tell him. Why bother? He’d never been a real person she could touch before. All the boys she shunned, all the dates she subconsciously sabotaged were because of him. She hadn’t even kissed anyone in over a year, which was right around the time she realized her feelings. Even though she knew she would never meet him.

But now he was coming.

She turned the little carousel over in her hands, listening to the subtle jingle of the parts inside that would play music if she wound it. They sounded so far away, but she knew she could just twist the knob and they would echo through the cabin at a high decibel.

She looked at her watch. Forty-five minutes until he would be sitting in her favorite coffee shop, the one she’d talked about often and even Skyped with him in so he could see it. She wanted to show him everything she loved, and there was only one place he hadn’t heard of, and this was it.

Maybe she would bring him, show him the hideaway she visited for the big decisions. But then he might notice the fresh footprints and put the clues together, somehow realizing that she loved him. He might say “Were you here today?” and she couldn’t lie to him. She would have to admit it. And he would look into her eyes and ask “What was the big decision you had to make?” and she would blush and smile and he would take her in his arms and she would feel him for the first time after years of wishing and hoping and their lips would meet for the first time in her favorite spot and she would share it with him and maybe, just maybe, he would fall in love with her in that moment.

She would bring him here. They would get tea in little to go containers, and she would show him to her favorite place and hope he noticed her footprints in the snow.

They walked over to the algae-covered jetty as a wave splashed off the rocks and into her face. He laughed.

“Shut up,” she said, wiping the salt water from her eyes. “Wise ass.”

As he went to step over the rocks, he stopped and leaned down to look between them.

Between the rocks the ocean had somehow sifted millions of baby clams out of the sand and into deep puddles of shellfish.

“What is it?” she said approaching him.

“The tiny ones we kept seeing along the beach?”

“Yup. Ew, look at them all trying to dig at once.”

She leaned in to see the piles moving almost in unison, little tonguelike appendages sneaking out from between the shells and reaching around searching for sand in which to dig.

“They’re moving together, that’s weird!” she said. He agreed.

They sat on the rocks, mesmerized by the eerie motion of the millions of clams as if one giant body.

That’s when he saw it coming and stood up. She wasn’t as quick. The wave came smashing between the rocks and sprayed her again right in the face.

“Thanks” she said, wiping the water from her face once more.

“Any time,” he said with a sly smile.

Reading “A Coney Island of the Mind” 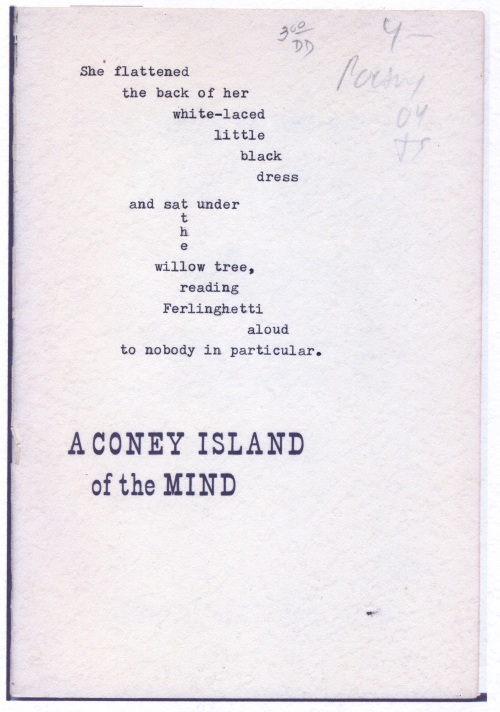 Created with an old 1958 copy of A Coney Island of the Mind, my own mind and my typewriter.

“This hill is nice.”

“Told you,” he said, taking a sip of his iced tea.

“You were right. Is that what you wanted to hear?”

“I’d say it’s perfect, considering what we came here to do.”

“We don’t need it to be romantic for this.”

She smiled with a certain curtness that only she could muster.

He handed her purse over, and she began rummaging through it.

She flipped it and dumped everything out, and they both rummaged through the contents.

“Here they are!” he said with a certain amount of triumph in his voice.

She took one and opened it, and he did the same.

“I love playing with bubbles,” she said with a smile and a wink.