They all gathered to hear the letter from their long-missing relative, William, Junior. His mother Betty called to her sisters from her alley window, who called their children from slumber, and they all met on the community patio outside of Betty’s home to hear the news. Frank, a second cousin, had secretly been taking bets that young Will had been killed in a bar fight, while his sister Evangeline insisted he had joined the Peace Corps and was saving the world.

Betty didn’t even change from the robe she wore around the house; as a matter of fact, she hadn’t even bothered putting on shoes or slippers. The others, some of whom took the time to get dressed in their day suits, some still in pajamas, all congregated around the family matriarch, whispering at the possibilities of what the letter might contain as she carefully pulled at the envelope. The markings on the postage said California, which was quite a long trip from William’s hometown of Coney Island.

They were waiting for Will’s youngest brother, Peter, who had run into town to get his father, only to have the elder William return before him. Moments later, Peter ran up to the group, panting. Nobody bothered to ask what had taken him so long as Betty pulled the three pages out and started skimming the letter before her public reading. A single tear ran down her cheek as she cleared her throat and prepared to read aloud.

He couldn’t help it – the little red mailbox had the flag up, signifying he had mail. It hadn’t been up when he left the table in his favorite little coffee shop to grab a book from his car, had it? He couldn’t remember. He looked around with curiosity, then took a sip of his mango tea from the heavy blue mug. 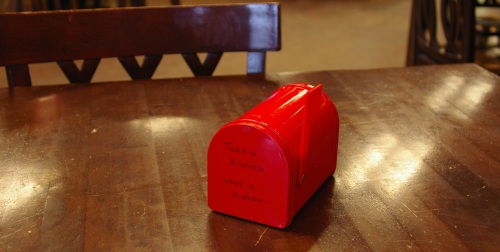 The red mailbox had Take a kindness…leave a kindness scribbled in black Sharpie on the door. He opened it and found a small notepad with a happy little robot on it. He flipped through, reading each handwritten thought, until he turned to the final page that said “You never know. Right now someone could be looking your way and thinking That could totally be my soul mate.”

He looked up and saw an adorably cute girl with short blond hair smiling at him. She waved.

Special thanks to my favorite coffee shop, Burlap and Bean, for the inspiration.

August (June) A Story of Connections

Watch for more connected stories as the days go on. I am writing a bunch that can both stand alone and become part of a bigger picture. I hope you enjoy them!

August was pouring hamster food into the little dish when the mail dropped through the slot and landed on the floor of her gallery. The sound startled her a bit and the pellets poured over the edges of the bowl and onto the desk.

She put the bag down and ran to the mail before Stephen, the homeless boy she hired to help in her barely-making-ends-meet gallery, could beat her to it. She started sifting through the envelopes, quickly hiding any that had her real name on them.

“Who’s June?” the boy asked from behind. She turned to see him holding an envelope.

“Give that to me, Stephen! Shouldn’t you be working?”

“Geez Aug, I was just trying to help. It slid under the welcome mat.”

She snatched it out of his hand and went to her desk.

“Want me to finish feeding the little guys?”

“Sure. But some of them are girls.”

Stephen gave her a “whatever” shrug and opened the top of the cage. Small black hamsters started scurrying from all corners of the gallery’s yellow hamster tubes that seemed to line the walls. He laughed.

“Are these things like gremlins or something? I swear there are five more since last week.”

August looked up from the papers that now littered her desk. “Huh?”

“Did one of these guys have babies?”

She pushed her long brown hair behind her ears, bringing to light just how much they stuck out. But Stephen didn’t care. She looked at the cage from her seat.

“Oh Petunia had babies on Wednesday,” she said absentmindedly.

“Did you name one Dudley?”

August’s phone played a little song signifying a text message, which she read.

Are we still on for tonight? – Jennie.

She quickly replied. Yes, he said he would be at the restaurant at seven.

It rang again less than a minute later.

Okay. I’m still not sure about this.

She would have to respond later. The jingling bell let August know a customer had just entered, so she had to get to work.

The gentleman had an expensive Armani suit covered by a Burberry jacket and scarf; he had money and she shook a little with the hope that her little gallery might actually make a decent sale.

“No, just browsing,” he responded.

“I’ll be right over there if you need me,” she said, pointing to the counter. She returned to her mail as the man looked at a section of sculptures. He gasped once, twice, and a third time as he went over the selection. He approached the counter.

“I’ll take those two, and that one. Do you have anymore by this artist? Her sculptures are amazing.”

She looked at the works and shook her head. “Sorry, not right now. But if you give me your card I can have the artist call you directly. She’s a close, personal friend.”

He nodded and pulled out a silver card case, removed one, and handed it to her as she finished ringing him up. Stephen was already packing the sculptures in bubble wrap as the man handed her his credit card.

She swiped, he signed with the quickness of a busy man and turned to find Stephen waiting, three boxes in his arms.

August’s hands trembled a little as she put the receipt into the register. It was by far the largest sale her little suburban gallery ever had. She would have to celebrate tonight. 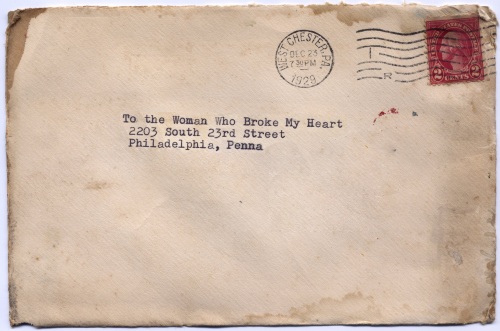 Made from an envelope sent in 1929 and with my typewriter.

Made with my Brother Charger 11 and a vintage envelope mailed in 1927.