Lunch in the Park 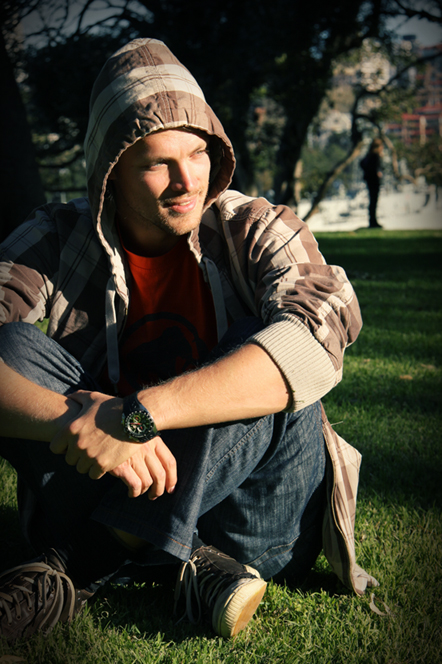 Photographs (besides the typewriter and note) by the amazing and talented Sandra Markovic, whose work can be seen here.

Lunch in the park was Trevor’s daily ritual. He needed the break from his job at the library, even though it was fairly peaceful. He was a lover of the outdoors and it called to him, so every day he stopped at the café, ordered the same meal (mozzarella and tomato Panini, chips and an unsweetened iced tea) and ventured to the park.

It wasn’t until about a week ago that he first saw her. As he watched her pass, he couldn’t believe that the world failed to stop and take notice of her beauty. Nobody seemed to notice this perfect being as she passed; children continued to play, an old man kept feeding the pigeons, cars passed by as if nothing were happening, and only he seemed to notice this absolutely remarkable girl, a miracle, really, making her way past him through the park. She was wearing a flowing vintage yellow dress, and she carried a heavy looking suitcase that she carefully placed on the grass. The lid came off to expose a typewriter, of all 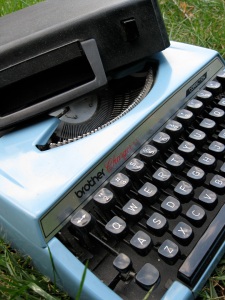 things. Trevor hadn’t seen one since, well he hadn’t ever seen one in real life. He was drawn to her immediately. She sat and looked at it, marveling at its structure, but didn’t type a word.  She played with her long brown hair, feigned pushing a key or two, but no actual typing commenced.

It was another day or two before she showed up again, this time in jeans and a vintage Rolling Stones t-shirt, again with the typewriter. She placed it in the grass, opened it, and this time loaded it with paper and began to type. She was slow at first, as if she were just learning how to use it. Her long blonde hair glimmered in the bright sun, and he spent his whole lunch break looking at her and eating his meal.

Today was the third time she showed up, and Trevor’s heart sped up a bit, his pulse quickened as he saw her approaching yet again. Today, a plaid dress was her outfit of choice, and simple black flip flops. Her figure was perfectly visible in the tight dress, and he gasped a bit at the sight of her beauty. Again, she sat in the grass, same spot, and began her slow, methodic typing. She put in a piece of green paper, browning at the edges from age, and punched key after key as she worked hard on something. Trevor, on a nearby bench, was close enough to hear her make a tiny growl as she grasped the top of the paper and yanked it out of the typewriter, making the fast clicking sound as she pulled. She crumpled it up and started at it again. 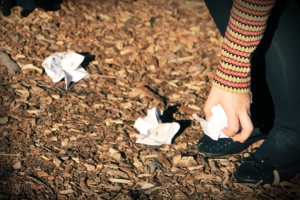 After a few tries, all ending in a balled up piece of old green paper, she looked at her watch, closed the typewriter and gathered the balls of paper. As she walked by the trashcan right next to Trevor, so close that he could smell the flowery perfume she wore, she threw the failures into the trashcan, continuing on without so much as a glance towards the receptacle, the bench, or Trevor. If she had, she would have noticed one of the wads hit the rim of the trashcan and bounced onto Trevor’s lap. He waited until she was out of sight, picked it up, and opened it with great care. It said:

Trevor gasped a bit. He knew what he had to do.

The next day, as the mysterious typewriter girl walked towards her usual spot,

Trevor was already there, a blanket covering the area where she always sat. She stopped and he sensed her behind him looking at him, so he turned to face her, noticing a fitted striped tee shirt dress with black leggings and a black cardigan.

“Hello. I’m Victoria. But my friends call me Tor.”

He stood up and put out his hand. She took it and he held it a bit too long as he shook it. She smiled.

“Would you care to join me? I have a picnic lunch.” He smiled his biggest, warmest smile, and she felt a little tingle run up the back of her neck.

“Sure,” as she fumbled with the typewriter and her bag, trying to put both on the ground without making a scene. She sat and he did as well, facing her from across the basket.

“I love those, especially tomato and mozzarella.” His eyes widened, but he tried to play it cool.

“Oh, good. That’s what I brought,” a simple, nervous smile. He passed her a wrapped parcel, which she opened with great care. He did the same, then held out a diet cola and a tea, and she pointed to the cola.

“Thanks, this is so nice of you Trevor. But why?”

He froze for a second or two, then responded. “I come here every day, see you here a lot lately, and thought I would say hi. I love your typewriter,” he said, nodding towards her suitcase.

“Thanks,” she said, blushing a bit. “It was my grandmother’s, and I found it and thought it might inspire me. She always said she’d met my grandfather because of it, but I never really heard the full story. All I know is how it ended.”

He smiled. “Wow, that’s pretty neat. What are you trying to do with it?”

“I’m a writer. Or I want to be. I thought, maybe, that it would inspire a great novel. So far, it’s only created junk that I’ve thrown out.”

“Maybe you should keep trying,” he replied. She smiled.

She raised an eyebrow, and he realized he slipped up. “Er, I mean, I’m sure you’re a great writer. I mean, I can tell, you know? You seem pretty amazing, from where I’m sitting.”

Her smile returned. “You’re sweet, Trevor.” Hearing her say his name kept made his heart jump, and he reacted a bit. “What?”

He blushed. “Nothing. How’s the sandwich?” She smiled and nodded, her mouth full when he asked.

They continued eating a bit, chatting until the sandwiches were done and his lunch break was almost over. He looked at his watch, and in doing so caused her eyes to widen and grow sad.

She shifted her weight and smiled, looking down at the blanket.

“Of course, if you want to,” he said with a huge smile.

She looked up and whispered, “I like you, Trevor.”

He turned and saw that she was looking down at the blanket, so he leaned towards her and rested his weight on one hand. “Hey Tor?”

She looked up, and her eyes looked at him as if he were far, far away and she couldn’t wait to see him again, except that he wasn’t, he was right there, and he was leaning in towards her, bringing his lips towards hers, and as her eyes grew even wider, excited, her upper lip quivered just the tiniest bit in anticipation as he came closer and closer until-

9 responses to “Lunch in the Park”