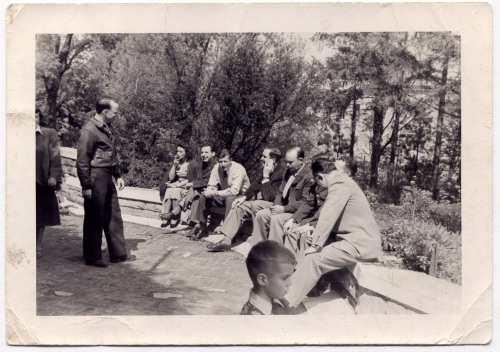 The men all sat to one side, dressed much more casual than their female counterparts, avoiding the talk of new clothing lines and the coupon section of the newspaper.

None of them knew each other, but this was to their liking more than taking part in a garden party. They talked of manly topics such as the new Ford, baseball and work. One of them, a car salesman, tried to convince them they all needed the ’44 that was coming in next week. Another, a soldier on leave, spoke of the war and regaled them with bloody stories full of bullets and bombs and explosions.

They watched from afar as their lady folk drank tea from fancy little cups and ate tiny desserts squeezed between their fingers.

Both sides checked on each other here and there. A husband nodded to his wife from across the ornate garden. A wife smiled and raised a teacup to her husband or pointed out a fancy statue of a cherub. One young woman had a camera and shot a photograph of her husband, the soldier.

It was like a school dance, but they were adults, at a garden party.

Typing on the back of the original photograph.