As he sat in his moon chair listening to the rain he realized what a perfect Sunday it was.

He felt the excited/trapped feeling people get sometimes in storms. Moments like this had been his favorite since he was a child.

It was nearly perfect, but something was missing. As soon as he recognized what else the day called for, he ran to his record collection, moved a lamp close by so he could read them in the cloudy darkness, and pulled out all four of his Smiths records. He put one on, turned the sound down to a three, and returned to the moon chair just as A Rush and A Push and the Land is Ours started up on the player. 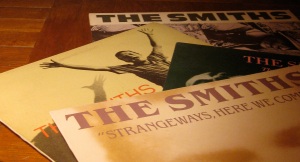 He hit start on his record player and watched the little arm get up, move over and gently press the needle against Cat Power’s You Are Free. For some reason this album reflected his mood.

It was a cloudy day, but allegedly it would not rain. It felt like Fall that morning when he woke up, so much so that he had a cup of Irish Breakfast tea with a bit of milk. It hit the spot, as they say.

His stomach had some sort of pit, an inexplicable one, almost foreboding. He did not know why, but his stomach usually knew something he did not know.

The music started and he sat on the couch and picked up the now luke-warm tea. A sip of the liquid sat in his mouth for a moment as he savored it. This was one of his favorite moments. A Sunday morning. A record. Some tea. And yet, he was uneasy.

His neighborhood, usually a hotbed of noise and action on weekends, was absolutely silent, as if everyone had decided to hide in their homes even though it was a perfectly nice day. Nobody mowed their lawn. No children played. Not even a dog barked. A high-pitched noise hit his ears, almost cricket-like, but besides that, nothing save Cat Power’s eerie voice.

He rested his head on a pillow and looked at the ceiling, wondering what today would bring. Would it be surprisingly good, or would the pit be right? He could not wait to find out.

He jumped a bit as the record stopped and the needle abruptly jumped from the record, bringing him back to silence.