The Boy With No Happy Ending 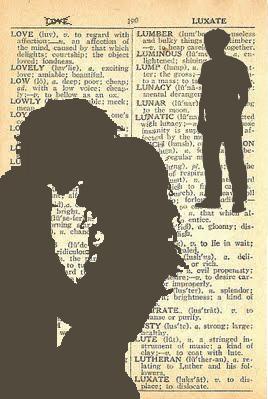 Artwork by Kate Hiscock of Slightly Me

He watches them embrace from across the street, right under the little orange hand that warns him it was not safe to cross. It glows, mocking him, forcing him to keep his distance.

He wants what they have. But he know his role in life, he knows where this all ends up.

He is the boy with no happy ending. If his past has taught him anything, it is this. And he accepts it.

He has this power over people, they find him so interesting, so quirky, so rare.

And yet he will never find love. And he accepts this.

The couple across the street, coming in and out of view as cars rushed by blurring his view of them, move as if under a strobe light.

Flash. They are kissing.

Flash. She pulls away.

He watches, trying not to, attempting to look away before they notice how he stares at their obvious and understood love for each other. Everyone witnessing this moment can see their devotion. It is clear.

He wants a beautiful person to kiss on a corner, a sad goodbye even though they both know they will be in each other’s arms again later that night.

He will never meet that girl. And he accepts this.

Flash. He gently strokes the tattoo on her arm.

Flash. She brushes a tuft of his dyed blonde hair away from his face.

Flash. He does the same to her and laughs.

Flash. She lets out a flirtatious giggle.

Flash. They are kissing again.

A bus passes and The Boy With No Happy Ending notices a woman on it with messy hair and an oversized gray sweater on. She is staring out of the window with a distant, melancholy look, and he knows how she feels.

As the bus pulls away, leaving a dark cloud of pollution behind it, he sees that the couple is no longer embracing on the corner. The girl is walking away, the guy is walking towards his side of the street.