Nobody knew she had a crush on her soccer coach. Not a soul.

Except her parents, who watched her get ready every evening with just a little more gusto than anything else she did in life. She would always very carefully figure out what outfit would look good without trying too hard, you know, since she was learning soccer.

But that was it.

Well, maybe the elderly couple who passed as they did their daily pre-Wheel of Fortune walk. They could tell because of how she laughed just a little too hard at his jokes.

But not another person knew.

Well, except for the guy who was a little too old to be enjoying playing with his remote control car about two baseball fields away. He knew because he could see her smile from there.

Except the two strangers who ran every evening at the same time in opposite directions, nodding each time they passed one another on the circular path, each hoping the other would break the runner’s code and stop the other to have a chat. They knew because of how she would twist her arms awkwardly with her hands clenched during each break for the coach’s instructions.

Seriously though, no one else knew.

Except that dad who was taking his daughter for a walk in a stroller. He could tell because of the way she couldn’t stay on both feet, and was kind of hopping back and forth.

Like the dog walker who had a little chihuahua and a larger spaniel. She knew, because she remembered those days and could just tell.

And the person driving by, who saw she stood just a little closer than was usually comfortable in that situation.

And how do I know? Because I was one of those people. It doesn’t matter which. But we all knew.

Even the coach knew. He was older, wiser, and used to this. But he loved his wife more than he loved teaching kids soccer, the most popular sport in his home town across the sea.

As far as she knew, nobody knew she had a crush on her soccer coach. Not a soul.

Strangers on a Train

As I sat on the train I noticed the people in the seat directly in front of me. She had a big white knitted hat on as protection from the bitter cold of the early Philadelphia morning. His hat was striped and didn’t look nearly as warm. Her head rested on his shoulder and I could see from my vantage point that she was dead asleep. I wondered how long they had been on the train that her slumber could be so deep. Maybe she was just a good sleeper. 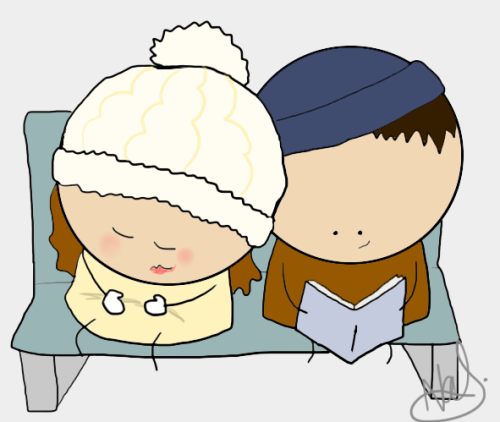 I could hear the pages turning in something he read; it sounded more like a book than a newspaper. They have a much louder sound and longer page-turning time. He seemed so relaxed and content on his morning commute. I assumed they knew each other; people need a certain comfort level to rest their head on another’s shoulder. Or maybe that’s just me. Who knows.

My single-ness was a bit painful after seeing two people so comfortable with each other, so relaxed and close. It ate away at me as I looked down at my boots, toes awkwardly pointed inward just the slightest bit, my tights keeping my legs warm and the gray sweater dress that I painstakingly chose this morning in the hope of seeing that guy I have a secret crush on; I can’t help it, I have a thing for sweater vests, what can I say.

I wonder about these two people in front of me. They seem like nice, kind people, a couple I would love to hang out with. They’re about my age, maybe twenty-four or twenty-five at the oldest. While I am dressed for office work, they look like they could be on vacation or possibly going to work in some new trendy company that not only allows jeans, but expects them. I would love to work in a place like that.

The speaker crackles and someone announces Suburban Station, next stop, Suburban Station and he nudges her gently with his shoulder; she looks up. Lines from his coat mark her face and she smiles as her hand wipes the sleep from her eyes. The train hisses and slows, he smiles at her. She gets up, fixes her soft yellow coat, and kisses him on the cheek.

“See you tonight,” he says with a smile. She smiles back and nods, then turns and exits the train.

Artwork by the always lovely and talented Nadia Lavard.

They sat on the park bench facing each other as the lights came on and illuminated the area.
“I love this park. Especially for people watching,” he said to her. She returned a smile.
“Yes, it’s always a good spot for that.”
His eyes scanned the area and rested on a twenty-something girl with a flowered skirt, tank top and blue and white striped oversized cardigan. “Take her, for instance.”
“Yes?”
She was kind of bent over sitting on a bench across from them with her elbows on her knees, her long hair hiding her hands that could have been on her chin.
“I like her cardigan.”
“Yes, yes we both like her cardigan, but that’s not what I meant.”
She looked at the girl a bit more. Finally he broke her concentration.
“Well, is she sad? Her body language tells me she might be considerably morose.”
“I think she’s just on the phone. He hair is hiding it from our view.”
He looked again, this time with her point in mind. “You know, you might be right. But her face still looks sad, and her mouth doesn’t seem to be moving.”
The girl’s face suddenly broke into a smile, and from that to laughter.
They looked at each other and both said at the same time, “Phone.”

She sat on the hardwood floor, looking out the window as if it were television. Two children played…an old woman shook dust from a carpet…a car drove by…a dog sniffed the ground then urinated.

Her cable was out.

I’m proud to announce a collection of my stories was published in a lovely publication called The Fifteenth Dame Lisbet Throckmorton Anthology: 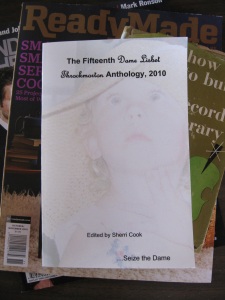 Click the image to order the book on Amazon. It was an honor to be selected with such beautiful stories and talented writers.

My collection are a bunch of short flash fiction pieces that take place in a coffee shop. There are two sections, Despair and Hope, some of the stories continuing from the Despair section to the Hope section. I’m really excited! Here are a few example flashes:

She removes her hood, as directed.  He wants to see her eyes as she ends it.  She sighs and takes a sip of tea.  He spins his mug of coffee on the saucer, noticing the tiny cracks in the glaze.

From above, all that could be seen was two people calmly reading.

From below, all that could be seen was a serious, ongoing foot war.

It was their first date, blind at that, and conversation was fairly smooth.  But he knew it would all work out because as she ate her giant marshmallow square, she broke a piece off, rolled it into a bite-sized, mouth-appropriate ball in the palms of her hands, and carefully regarded it between her finger and thumb before popping it into her mouth.

She loved sipping the hot rooibos tea but regretted her decision to sit inside on such a nice, clear night.  She looked out the window with an air of regret, but lacked the initiative to move.