The party, her party, was in full swing, as they say. Hundreds of her friends, her friends’ friends, and many complete strangers showed up for her food, her booze, to abuse the pool and the rest of her mansion. She felt like someone was secretly filming her and she had to escape.

The living room was full, as was the billiard room, the sauna, and all of the thirteen bedrooms. The foyer was full of coats and hats, the library was strewn with half-full cups hanging dangerously close to the edges of tables, threatening her aged and antique books. People had even spilled into the butler’s quarters, vacated for the weekend by her parents’employee for a trip.

She really only had one place to go, her secret place. She trudged up to the third story and unlocked the attic door, passed piles of vintage expensive furniture hiding under old sheets, passed the old moose head and stuffed bear her grandfather had shot decades before, to the oversized window that led to the roof. She pushed it and relaxed a bit as it squeaked open.

As she stepped out onto the roof she found that some of the balloons had gotten away from the guests and somehow landed here. She stepped onto the sill and stretched, her elbows rubbing the red brick walls, making her wince and check them for blood. No blood. Just a bit of red irritated skin with a little brick stubble mixed in. She would live.

She walked onto the roof toward the slanted shingles and began tidying up by picking up a bunch of the balloons, and then she stopped and sighed. Her odd neighbor always showed up handing out random balloons to guests, the reason something she could not fathom.

She never understood how these parties happened, what led all of those people to her home when her parents were away, but they always just seemed to know. They would come, abuse her home and her family money, and then go, leaving behind a mess that would take days to clean. And the damage…if the house weren’t so big her parents would notice, but these days they didn’t seem to notice anything.

She walked to the edge and looked down at the party, then walked to the other side and peered over the slant roof down into the rectangular pool that went unused for the past few years, ever since they had the endless pool installed on the other side of the house. Captured in the water were a few more rogue balloons floating slowly around the glass-like water, and past the pool a bit was the odd neighbor, still holding a bunch of balloons. 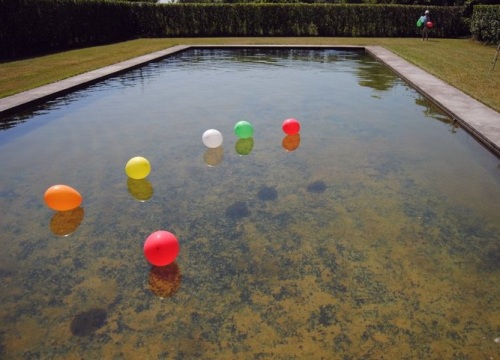 She returned to the wall next to the window and leaned against it, sliding down until she landed on the shingles under her and she sighed, holding the balloons, waiting for the party to end.

Photos by Geraldine, who has a Flickr. The model is Manon, and this is her blog. The concept for the photographs was a collaboration of the two.

The Translucence of Jellies

Enjoy the short film at the end of this blog for more photographs.

We stood there, mesmerized by the relaxing, almost magical movements of the hundreds of jellyfish in the tank before us. In slow motion her hand left her side and reached toward mine as the translucent creatures swam around in the large tank, and once I realized her hand’s destination I started moving mine toward hers as well without taking my eyes off the glowing ocean dwellers. The tentacles, like little legs, kick off against nothing as one of the jellies swims in our direction, unaware as yet of the glass keeping it at bay, and I reach my free hand up and press it against the glass as if I could share a moment with this creature. Meanwhile, her fingers grasp and wrap around mine and she pulls a little closer to me as the jellyfish continues on course toward my hand, only to bump up against the glass, turn and swim away.

The word translucent inspired this story, passed on to me by Elle.

Posted in flash fiction, Inspired by a word...