John was trying to communicate but just couldn’t get anyone to assist him. “Excuse eh mwa,” he said to a man who ignored him and continued through the Jardin de Petit Palais.
A tall thin man passing by overheard his struggles and approached.
“Bonjour, madame, monsieur,” he said in a thick French accent. He spoke in his 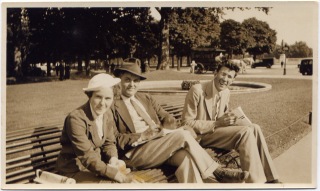 native tongue to the man who nodded and walked away.
“Well, it’s nice to know not all Frenchmen are rude,” John said to the stranger. “I’m John, this is my wife, Mabel. Won’t you join us?” The man adjusted his glasses and sat down with them on a park bench.
“I’m Albert. First time in Paris?”
This time Mabel spoke. “Bon-joor, Al-bear,” she exaggerated his French name, trying her best. “Yes, it’s our first time. And we love it. Dja adoor,” she said with a smile. He smiled back, appreciative of her attempt.
“Don’t judge Paris on this man. Not all Parisians are like him. Where are you from?”
“New York City,” John said with pride.
“Ah, yes, ze big pomme…er…apple, yes? I’ve been zere once. I loved it. Very fast. What have you zeen zo far in Paris?”
“We climbed that tower of yours. It’s no Empire State, that’s for sure,” John responded.
“But beautiful and very romantic,” added Mabel. She adjusted her jacket and fixed her white hat.
“Ah, been to ze famous Parisian stores, hmm?” Albert asked her, regarding her hat. She giggled and blushed a bit. “It is very…you – as you Americans say. Where are you headed now?”
John pulled out a small travel guide and flipped to a specific page. “The Arch De Triumph.”
“Say it like ze Noah’s Ark. Ark.”
“Aha! The Arc de Triumph. Got it. Thanks, Al-bert,” he said, forgetting not to say the final t of his name. “Er…Al-bear.” Albert nodded in appreciation.
“I am heading that way, would you like me to show you?”
Mabel giggled again. “Oh, yes, please do join us! Is it okay Johnny? Imagine being shown around by a true-blue Frenchman!” John nodded and they were off.
The café was just three short blocks from the arc, so they barely had time to chat before they came upon the street they had to cross to get there. “Be careful crossing here, it is a very busy street and Parisians don’t always stop.” He laughed as Mabel looked nervous. “I kid, I kid. Come.”
As they approached, another man in some sort of uniform saw them approaching the building and headed for them. He spoke French to Albert, who responded quickly as if the two were great friends.
“Zis is my friend, Francoise, and he has agreed to let us go up to the top. Would you like zis?”
“Oh yes! Of course we would!” Mabel said. Francoise led them to a door and unlocked it with a smile.
“Bon journee!” he said to them after shaking Albert’s hand.
After many stone steps, they made it to the roof. Mabel ran to the stone wall that surrounded the top and pulled out her camera to take a shot of the Eiffel Tower. 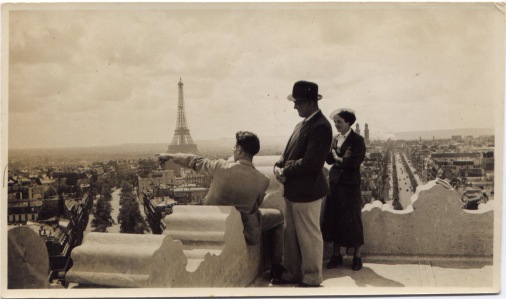 “Look at this view!” she said with a gasp. “John! Look at Paris from up here! This is better than from the tower!” She snapped a few shots while John and Albert watched.
“We really appreciate this, Al-bear,” he said. “Mabel sure loves it up here.” She ran from side to side snapping shots and advancing the film in her camera as the two men watched on.
Albert walked to the wall facing the tower and sat. “You can see all of the arrondisements, from here. I am from the 4th, which is just zere,” he said, pointing. “And I work in the 11th, as a professor, that way,” he pointed again. “I’ve fallen in love in each of ze arrondisements except the 12th. No luck there, yet.” Mabel sighed and leaned into John, taking his hand. He was startled just the smallest bit because he wasn’t aware she was there listening.
“You’ve fallen in love that many times?”
“Oui. How many times pour vous?”
“Just the once…John!”
Albert sighed. “Perhaps I should be in ze twelfth.”
Mabel smiled. “Oh yes! That’s probably where she is! Waiting for you!”
Albert leaned back and let the sun warm his face. “I have a…friend there. Geraldine. She is lovely. I adore her. But…she is just a friend. She does not see me zees way.”
“Nonsense! You’ve got a stable profession, you’re good looking, what else could a woman want?”
He stood and placed his hands in his pockets, looking over the city in the direction of the twelfth.
“You should ask her on a date. Why not? She’d be crazy not to fall for you lickety-split, I tell you. Tell him!” she said, nudging her husband. He just stood looking toward the tower, pretending not to hear.
Albert’s eyes looked distant as he continued to stare into the twelfth arrondisement. “Perhaps,” he whispered. 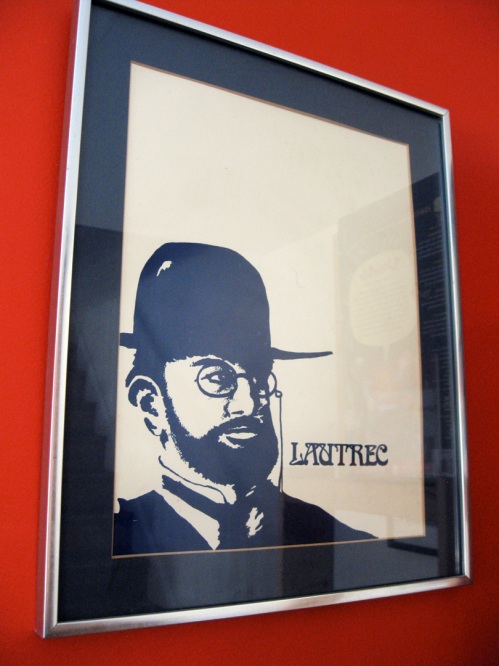 She slowly backed the car into a spot, then pulled up a bit, then backed up a little as he eyed up the row of artwork lined up at a yard sale.

“Would you park already!” he yelled playfully. She giggled and started pulling forward again just to get him riled.

“Hey!” he said, pretending to shove her. She laughed harder.

“You know I can’t do that. Yard sale etiquette.”

She stopped the car and turned off the engine, but by that time he was already out the door.

“Come on!” she heard him say, muffled through the closed windows. She smiled; she couldn’t help but love him. She undid her seatbelt and joined him.

They were both pulled toward the same piece of art at the same time.

The artwork was a dark blue silhouette screen print of a man with a big had, bushy beard and old-fashioned glasses. Next to the image was the name Lautrec in fancy lettering.

“It would look great on our red wall,” she said as she pulled out her phone and started typing what he could only assume was the name on Google. He waited a moment knowing what she would say.

“Well that’s a mouthful. Glad the artist shortened it for this print.”

She ignored him and continued. “Post-impressionist French painter, printmaker, draftsman and illustrator, wow he sounds interesting. Says he is as well known as Cezanne and Van Gogh.”

“Hmm…then why haven’t I heard of him, but I know them?”

She ran her finger up the screen. “Um…you have. We brought one of his back from Paris.”

“Yup. Look!” She showed him the phone.

He looked at the print once more then held it up to the purveyor of the sale. 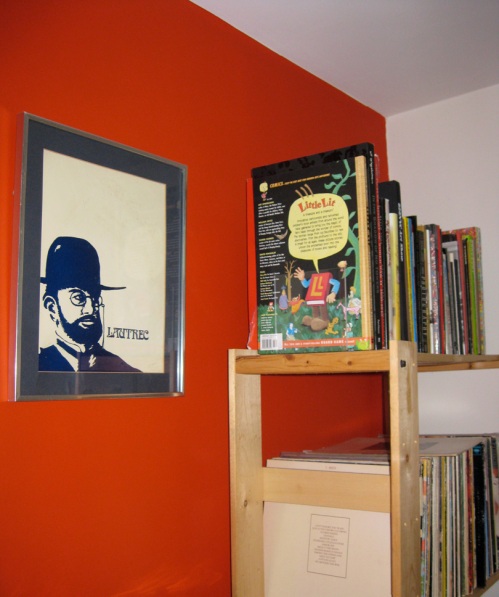 A Moment After a Long Day 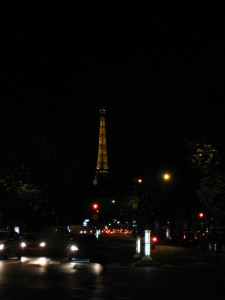 They sat on a bench, people watching, blocks from the hotel, exhausted from the steps at Sacre Coeur.  It had been a long, beautiful day in Paris, culminating to this moment, when he glanced to the left and noticed the Eiffel Tower. His first view of it at night.  He nudged her, pointed, and she smiled and sighed a sound of pure contentment.  He snapped a photograph, trying to capture the feeling of that moment forever.

He was in Paris. 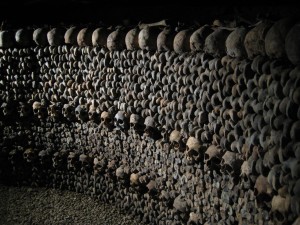 The ceiling was barely an inch above his head.  And he was not a tall guy.

He was claustrophobic but did not want his companions to know.  The tight spaces, small entrances, and close, stone walls were closing in, as they say.

Small corridors carved into the rock led to larger rooms, crypts, but the sigh of relief from the enclosed halls was short lived.

Bones lined the walls, sculls scraping at his elbows at times, millions of shadows cast upon the minute crevices similar to what was under his own skin and muscles.  A creepy wind blew softly, hitting the back of his neck, forcing a shudder down his spine and into his soul.

Bones piled tightly, centuries ago, stacks of human remains surrounding him, reminiscent of a horror movie.

A moment, capturing the scene, the essence, the death and decay of centuries, and then on to the next small, cramped passage, onwards and downwards to more crypts, more bones, more darkness, more chills. 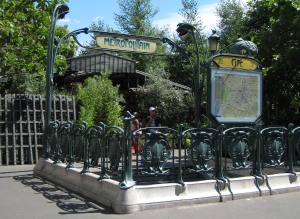 Photograph of the Metro I took in Paris.

“Be ready to push your way out if you have to.”

“Then we take the green line towards Porte de la Chapelle.”