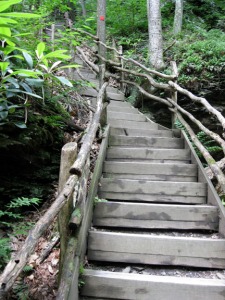 They huffed and panted, each leaning against the railing of the walkway from sheer exhaustion.

“Man, this is really tough.”

He looked over the picturesque mountainside, rocky terrain covering both the cliffs and the path they’d just climbed.

“So, don’t know if you noticed the sign, but this path has something like 1,253 steps, and that’s just the steps. Doesn’t include the regular hiking.”

“Wow,” she said between pants.

“Yeah,” he replied, sitting down on a nearby rock. He sighed from relief.

“Good idea.” She walked up beside him, plopped down on the rock, and then held his hand. He squeezed back.

“What, watching me sweat my ass off?”

She smiled.  “What a beautiful place.” 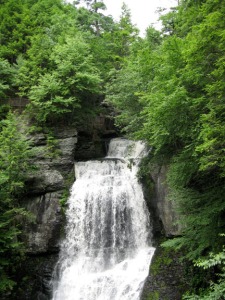 He leaned back and she rested her head on his chest as the constant sound of the rushing water of the falls soundtracked the moment. He reached into his messenger bag and pulled out half a bottle of water, opened it, and offered it to her first.

“Thanks,” she said, taking a swig and then handing it back. He wiped the lip of the bottle off on his shirt.

“Hey!” She shoved him a bit and he laughed and drank a large gulp of water. A family started making their way up the path towards them and he nudged her.

“Better get moving if we want to keep enjoying the peace and quiet.”

She nodded and stood up, reaching out her hand to assist him.

“How out of shape do you think I am?” he joked as she helped him to his feet. He turned and made his way to the next case of old boards that passed for steps at this particular park.

They stood at the bottom of the steepest set of least one hundred steps and looked up at them with despair.

He smiled and said, “Race you to the top.” She took off before he could even finish the sentence, and he bolted after her. 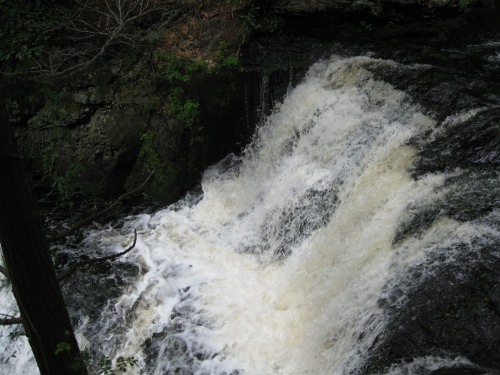