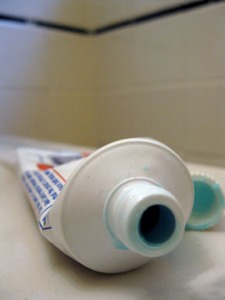 Their screaming could be heard from two floors down and the apartment manager already received a few calls, but he was used to it.

“I can’t take this anymore! Why can’t you just clean it off when you’re done?”

“It is a big deal, Dustin. It’s a HUGE deal! It gets all crusty and gross! Just clean it and put the cap back on when you’re done!”

He stood up from the leather couch and stepped towards the kitchen.

“Where are you going?”

She huffed and stomped after him towards the kitchen and arrived as he popped open the can. “What?” he asked, a defensive sound in his voice.

“Why can’t you just put the cap back on?”

He was about to yell back but instead laughed. “Did you just say squabble?”

“Well, it’s more of a grandmother word, don’t you think?” He did his best old lady voice. “You youngins…you quit that squabbling now.”

She turned away and frowned, pouting a bit. “I’m not an old lady.”

“This I know. An old lady wouldn’t have boobs like these,” he said, reaching around her waist towards them.

“Can you PLEASE just start putting the cap back on the toothpaste?”

“So the crusties stay away?”

“Exactly,” she said, softening a little.

He put down the can of beer. “If I do, you won’t squabble with me anymore?”

“I think we should go squabble in the bedroom.”

Her smile grew, and he returned in kind, then picked her up and carried her towards the bedroom.

A few minutes later the manager started getting calls again, but this time the noises were of a different nature.

Posted in flash fiction, Inspired by a word...