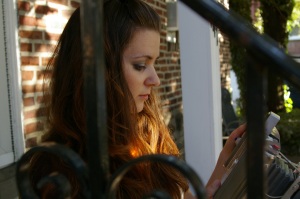 discovered at a yard sale fully loaded, an unlikely find. She took out a small cloth and cleaned the lens, then reread the directions posted on the back of the camera itself. She was ready.

She threw on a cardigan in case it got chilly as evening approached and walked to the door to look at the world through the camera. She moved it from one spot to another with a heavy sigh. After a moment she went outside to walk around and find some photo opportunities.

Wandering around her neighborhood was admittedly not the way to find great shots, but none of her friends would pose for her. If she were honest with herself, she would realize that she wasn’t really close to any of them.

The camera was exciting, but the prospect of taking photographs of flowers and trash on the road and trees and cars didn’t really feel like the ultimate use of this rare and almost magical ancient film. She wanted to capture the image of a person. To know the feeling of posing them just right followed by the satisfaction of hearing the click of the shutter.

This was the first time Alice realized that she was alone. No boyfriend. No best friend. A few acquaintances who never called her; she was always the one dialing them, asking them to go out, and then hitting end after they declined.

She walked down the empty street, dragging her hand along a chain link fence, and looked from house to house, car to

car, nobody to be found. She headed for the playground in the hopes that some parent would be there pushing their child on a swing, or teaching them to ride a bike. But when she got there she realized it wasn’t right. She relaxed on a bench and watched some kids play on the nearby jungle gym.

She moved to the swingset and let the Polaroid rest on her lap, her free hand holding the chain, resting her head against the cold metal chain. 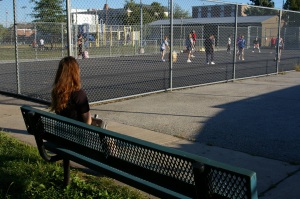 Photographs taken by me of model/makeup artist Sarah Maccarelli, whose work can be seen here. She was great to work with and was quite the actress, considering how happy and friendly she was.

6 responses to “The Funereal Photographer”