“Did you notice nobody on stage ever said the word Beatle?”

“Yes. I found it odd and was paying attention. We’re seeing Ringo Starr, live, and the word Beatle has not even been uttered.”

She thought about it, and as she did he spoke into the microphone.

“This is a little song I sang that a couple of my old friends wrote for me.”

“See?” I said to her. She nodded as he started singing Photograph.

“Now we’re going to hand the show over to a good friend of mine, Edgar Winter.”

I paid how much to see Ringo? And he’s handing the show over to someone? What the hell?

“Are you ready to ROCK?” Winter yelled as I was a bit confused, even dumbfounded. Sure, there’s something to be said of hearing Edgar Winter sing Free Ride live, I’ll admit. But I can’t decide, is this a good thing or a bad thing?

“This song makes me think of Dazed and Confused,” she said to me.

“Yes!” I responded, still confused about my feelings on this issue. I mean, what if we hear this, but Ringo doesn’t sing No No Song? Or Octopus’s Garden?

This went on for four songs.  Will Palmer of The Romantics singing What I Like About You. Rick Derringer singing Hang On, Sloopy. Richard Page singing Broken Wings.

So the big question is, will he play the two songs I want to hear more than anything?

“So for those of you who don’t know, which is most of you, I had a new album come out in January, Y Not.”

He did not play them. No Octopus’s Garden, no No No Song. So am I pissed? I still don’t know. It was fun, to be sure. He closed singing With a Little Help From My Friends, which was breathtaking. Exciting. Awesome. Yellow Submarine, sang by Ringo? Excellent.

“What was your favorite song?” she asked me. “The finale. With a Little Help. For sure.”

“Me too,” she responded, taking my hand. 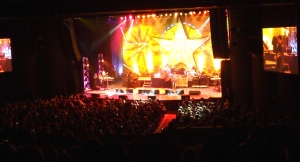 5 responses to “Tales From Ringo”