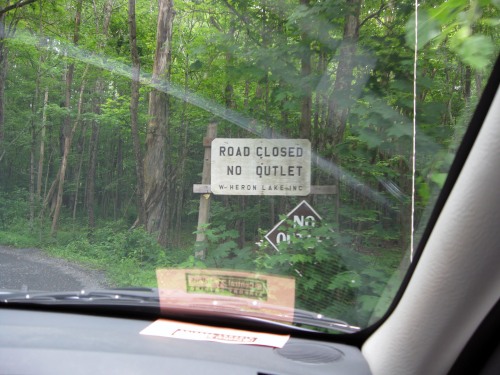 “The GPS says to turn here!”

Sure enough, as I scoured the tree-lined side of the road for the turn this robot voice was now telling us about, I could not imagine why we would turn into the woods.

Suddenly as if out of nowhere, a small, wooden bridge appeared in the brush. It looked sturdy enough, but before I could reply either way she turned the wheel and we were on it.

“Um…this isn’t even a road!” Ahead lay nothing but dirt.

“I know…but once on Office it told Michael to turn and he read it wrong and ended up driving into a lake.”

She looked at me.

I looked up and noticed a rickety sign that said “Road Closed” and under that saw something about the word lake and freaked.

“Relax!” she said laughing. To be honest, I was laughing too. How could a GPS even know this dirt road existed, let alone that it was closed? We were laughing too hard to even watch where we were going.

“Turn around!” I yelled between laughs.

“Where?” All of a sudden we were driving past a brand new house with a small clearing across from it.

“Really, here?” I asked. Why would anyone choose this spot to build a house?

She laughed more as she turned into the clearing to make a three-point turn. I had my camera out.

“I hope someone comes out!”

“Don’t you dare take a picture of people if they come out! Nobody even knows we’re here!”

“Come on. A house that nice, they’ll probably offer us fresh squeezed lemonade.”

“Do you see any lemon trees around here?”

She had a point, but still.

We laughed hysterically until we came back to the bridge, and all of a sudden the GPS righted itself and the robotic voice said, “Turn right, ahead.”

5 responses to “Turn Right, Ahead”