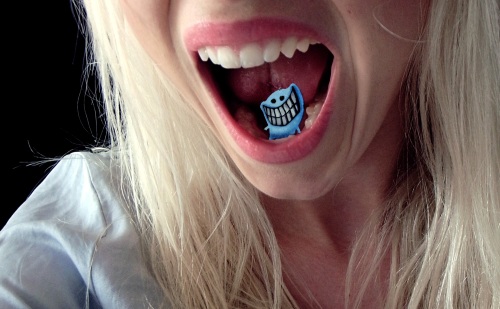 The caavy, commonly known and often mistaken as a tooth fairy, lives in the mouths of human beings, finding nourishment from small chunks of tooth (usually slathered in sugar) that they dig out using their small claws, of which they have one on each hand. Caavies are known for violent territoriality and an obsession with sugar.

Tandfe awoke from his slumber and emerged from behind the tonsil, stretching his arms as far as they would go and performing his evening breathing exercises. He knew from the breathing patterns of his host that it was asleep and the growl of Tandfe’s stomach reminded him it was time to eat. He sharpened the single claw on each hand against his pointy teeth and climbed up the soft cave to the mouth of his home.

Tonight would be a feast! Once again Tandfe’s host skipped the evening cleaning ritual of his oral cavity that it’s parental figure was always complaining about (Tandfe often woke up early enough to see his host simply wet his cleaning utensil, called a ‘toothbrush’, under a faucet and then place it on the counter). Tonight there was sugar a-plenty covering the chewing mechanisms that he feasted upon every evening. He smiled, showing off his full set of incisors as he scraped a tiny piece of enamel off a nearby tooth, tasted it and smiled with delight.

He scraped a bit more and sat down to reminisce, as he always did over dinner. He remembered growing up in the piles of crystallized sugar, being hatched and raised by his mama. He was taught to fend for himself and then was whisked off on a stick when the sugar was made into rock candy. Tandfe ended up going from there to this child’s mouth, where he made his home.

He got up and walked over to the nearest tooth and cut another chunk out, noticing that this one was starting to turn a little black around the edges. He knew this meant to leave it alone, or that horrible human they called dentist would come with all of the loud machinery and scraping tools, forcing Tandfe into hiding in that dark smelly spot to the south of the tonsil.

He also noticed another tooth was loose, and knew to dig into that one as much as possible. Humans, unlike caavies, lost some of their teeth as children; it wouldn’t matter how much he ate, so he attacked it. Soon, it would fall out, and he would eat the whole tooth in a night. He always loved those nights, stealing the baby tooth from under his host’s pillow – the only downside being that he had no pockets and always lost any loose change he was carrying.

As he reminisced and planned for his next out-of-body adventure, he noticed the breathing patterns of the host start to change, and knew it was time to go back into hiding, so he jumped up, scraped a little more food and shoved it into his mouth.  He ran back to the tonsil, climbing back up into his hiding place and closing his eyes for another day of rest.

Artwork by the amazing Christina Mølholm, whose blog can be seen here.


Captain Alfredø Søximus, just Søximus to his friends (if he had any) peers out from his dark home under the dresser and sees his prey slowly drop to the ground, one then the other, as the human climbs into bed. The lights go out, but that won’t stop a true animalistic predator like Søximus. His diminutive beady eyes peer left, then right, his skinny tail swishing back and forth in excitement, his red pointy claws retract as he crawls out a little, then more, bit by bit until his whole miniscule body fully emerges from his lair.

Tonight is his night. He will finish off the pair and achieve his greatest goal in life.

A noise! He lurches behind a pair of jeans, his eyes peering up at the bed from his new hiding place, but no, the human is not waking up, just snoring. He takes a closer look at his meal, sees the machine knitting and sighs a little, remembering back to those delicious hand-made meals he had when he was a young pup (Søximus considers himself a true connoisseur). He continues towards his prey, his enemy, his meal.

He can smell them now, their fear, their anticipation at being his dinner. He’s within jumping distance. He pounces! Using all of the tiny muscles in his little legs, he lands directly on top of the pair and starts ravaging, attacking, tearing away at the soft wool, starting with the yellow stripes at the top, refusing to stop as the middle reaches his mouth, his meal chewed and masticated into nothing but minute clusters of what used to be wool, he nears the softer middle of his silent enemy, until he gets to the heel, where a hole makes it a bit easier to get down, but now he’s slowing, trying to finish the arch, stuffing his gut all the way to the toe and finally finishing, then sucking down the small threads stuck in his claws. His monster instincts tell him he cannot possibly eat anymore, he picks up his meal’s twin, its best friend and comrade, the two yellow stripes teasing him, the mouth wide as if laughing at his failure, and he realizes that it has won, he just can’t do it. He hasn’t room for another bite. He looks down at his bloated stomach, knowing he has once again failed.

He slinks back towards his lair, leaving the solitary sock behind, alone, discarded on the floor. His tail, now limp, drags behind him, sharing in his failure. If only they were ankle length, he might have succeeded.

Søximus thinks about tomorrow night and the possibility of success and his tail twitches a little as he scurries back under the dresser and into his bed.

Please check out Christina’s blog for more of her monster art and stories, and watch for more collaborations!