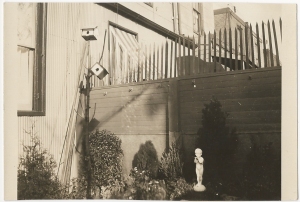 Glenda walked around with her watering can and when she saw the white of the stone out of the corner of her eye she did a double take. There it was, a statue on top of a small mound where yesterday she’d removed a dead flower.
She approached the statue and took a good look at it as some water spilled from the can she now tilted towards the ground. It splashed her slippers but she failed to notice. All she could do was look at the statue, a little boy with no clothing who seemed to be praying. Upon closer look, Glenda saw that he held his hands in a manner that wasn’t exactly praying; she couldn’t decide what he was doing.
A bird landed in her birdbath and startled her back to reality. She looked at the bird, a blue jay, and then returned her gaze to the small statue, which for some reason surprised her by still existing.
She walked over and picked it up. The stone was cold in her hands, which would have been normal had it not been sitting in the sun. It was heavier than it looked, much heavier, in fact. She turned it around and saw it’s little behind, then quickly turned it upside-down to look under the pedestal in an attempt to ignore the blushing of her cheeks.
There was writing carved into the pedestal, but it looked a bit like hieroglyphics. Unsure what to do, she carefully placed the statue back onto the little mound of dirt and continued watering her plants. As the water ran out of the end of the can, she paid no attention to the amount each plant received; instead, her stare remained on the statue.
Once the garden was properly watered, and the bird feeders refilled for her friendly neighborhood avians, she went into the kitchen, where she began to wash the small pile of dishes in her sink. The window above the sink looked directly into her garden, and she could see the little boy’s smile. His face looked so familiar. She’d seen it before, perhaps in a dream, but she couldn’t place it. So familiar…
That night, as Glenda began to drift away into sleep, in those moments in half-dream, half-awareness, she dreamed of her son, a mere boy when he died. The accident was something she tried not to think about in her old age, especially since her husband was gone. But she dreamed of a day on a swing set that may or may not have actually happened; Glenda could not be sure. She saw his face and the smile as she pushed him higher, the grin looking so familiar.
She jumped from sleep and quickly threw on her robe. She knew where she’d seen the face before. It had to be him. She ran through the kitchen to the back door, where she threw on the porch light and ran to the garden.
But the statue was gone. 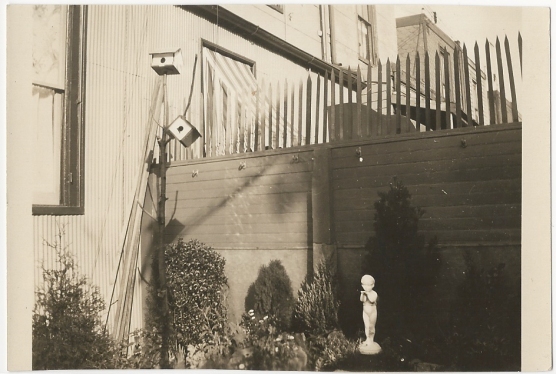