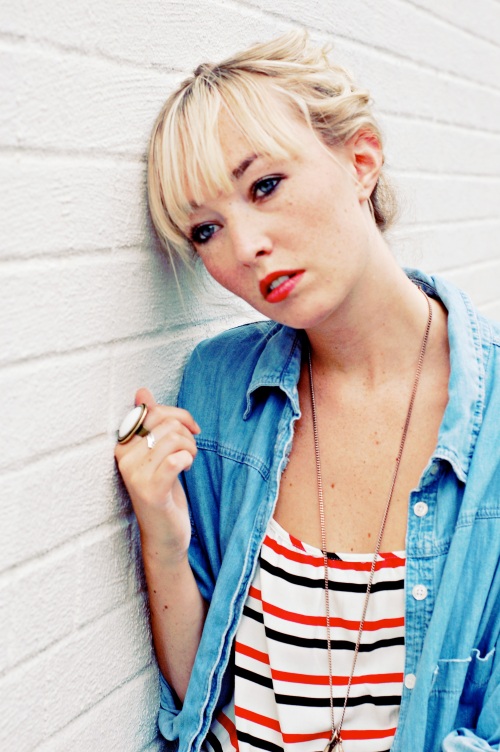 Photograph by Tracy Zhang. Her blog can be found here. Model is Betsy from RazorBlonde.

This was supposed to be the biggest event of her life so far. Her first exhibit. Press practically drooling over her work. People stepping on each other to be the first to congratulate her. And yet the hollowness continued to consume her even in the face of possible fame.

More effort went into this day than any other. She’d been at the gallery before the sun started its shift, and still wore the striped shirt she’d thrown on as she stumbled out of her studio apartment. Coffee sustained her, passion kept her going when the former failed her, and the culminating moment was upon her before she knew it as the crowd gathered and whispered and praised her photographs.

She walked down the aisle between walls covered in her work, black and white photographs of people, some looking at her as she passed, some looking away, as hands kept patting her on the back, tapping her shoulder, asking question after question that she answered in a daze.

Why hadn’t he shown up? Could he really stand her up on such a momentous occasion?

Ignoring the questions and deflecting the fans onto her agent and the gallery owner, Belle headed outside to the loading dock behind the gallery for a moment of respite.

She leaned against the brick wall, recently painted white, and thought back to the last year. She’d been to every single one of his events, large or small, dressed as beautiful and elegant as she could just to impress him and his clients. She’d given up a lot for him, and maybe this was the final sign that he wasn’t the one .

Her head rested against the cold brick as her ring scraped against the wall, waking her up from a melancholy daze. She stood away from the wall as if an alarm went off, checked her makeup in the reflection of her nearby car’s side mirror, grabbed the simple black dress hanging in the back seat and went back inside, ready to face the crowd, the fans, and the possibility of future fame.

One response to “Coffee and Passion”